Have you ever wondered how we connect sounds to objects?

Because we use words we’ve known since childhood to name objects in our daily lives, this could be a difficult question.  Why is a table called “table”, or “coughing” the word for coughing? If you could guess, what would be the explanation for this? Probably, most of you would think the phenomenon of mapping sounds onto objects started with onomatopoeia. This is a good place to start, and you would not be completely wrong, but it is not enough to explain entire words in different languages. Otherwise, we would have same words for every language, right? 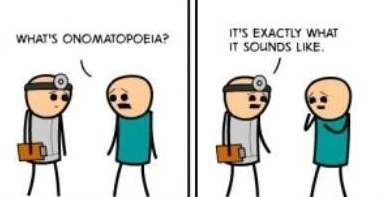 If you have ever tried to learn a new language, you would probably say doing this is not easy. There are many different words to learn, and grammar can also be very different from your mother tongue.  Wouldn’t it be great to have a commonality between languages for naming objects and make learning a language easier than we realize? Sound symbolism focuses on how people name objects, and it supports the idea that the meaning and the word are not arbitrarily associated.  For example, we could think about “coughing” as coughing because it gives us a similar sound when someone is coughing.

The arbitrariness of language has been debated for a long time, but at least there is some consensus that there are five different types of sound symbolism. The first one is corporeal sound symbolism. According to corporeal sound symbolism, sounds have a function as a symptom, so it reflects the internal states of the speaker by using specific meaning such as hiccups or whistles. The second category is imitative sound symbolism which includes onomatopoeic words from the environment, rhythmic movements, or animals. In this case, there is a direct connection with the names and the meaning of the words. From the synaesthetic point of view, some vowels and consonants specifically represent the size and the shape of the objects. For example, high vowels and palatal consonants are associated with small objects, whereas the lengthening of words is associated with large objects. Another type, called conventional sound symbolism, suggests that certain phonemes and clusters represent certain meanings such as “gl-“ for glitter and glimmer, or  “kl-“ for clink and clank, in a language specific manner. Finally, metalinguistic symbolism focuses on the grammar of a language. This type suggests that symbols are a part of linguistic structure. For example, tense of the sentence or pluralization can be count as a symbol selection. Several studies have been done to investigate sound symbolism theory. Let’s briefly take a look at different type of studies to have a better understanding of this phenomenon.

One of the most popular experiments to explore this idea was done by a word matching task within a foreign language. In this case, the foreign language was Huambisa which is spoken by people who live in north central Peru. In this experiment, all participants were English speakers without any previous knowledge of the Huambisa language and its zoological vocabulary. Participants were asked to match Huambisa words with familiar English words, such as fish or bird. The words were paired meticulously, and during the task, 50 words were used which are either a name for a fish or a bird. Participants had to choose the word which sounds more like a fish word or a bird word. The results indicated that participants had a high level of accuracy to match word pairs. Even though they had no idea about the bird and fish names in Huambisa language, most of the time they matched a bird name with a bird name and a fish name with a fish name. After investigating word pairs, it was obvious that bird names have “i” in the first syllable, and fish names had “a” as a low central vowel. It was interpreted as “i” is more associated with the fastness for many languages such as Swedish and Japanese. For the fish names they are highly associated with lower frequency segments, a symbol of slowness. So, it seems like we are good at guessing words in a foreign language, as well as learning a foreign language!

Another previous study supported the idea that sound symbolism makes learning easier. In this study, the participants were Dutch and the task was learning 38 Japanese ideophones, 19 with incorrect translations and 19 with real translations. After the learning task, they performed a recognition task to investigate the effect of the sound-meaning association. Participants were then informed about the manipulation of the translations.  After this, they had two forced-choice tasks to guess which can be the possible meaning of the word that they had learned previously. The results indicated that when participants learned the real meaning of the words, they had higher score for the recognition task of these words. Besides that, when they guessed the meaning of the words, even if they had been presented with the incorrect translation of the words, they had higher accuracy for guessing the true meanings!  These results showed support for universal sound symbolism, and sound symbolism has an influence on learning the new words. Even if we do not realize it when learning a new language, it seems like sound symbolism helps us to learn new vocabulary!

The effect of sound symbolism is not always related to how a sound is associated with its meaning. It also includes the sound-shape association. This is called Bouba Kiki effect and it was discovered in the beginning of the 20th century. According to this effect, people associate certain types of sounds with a certain abstract shape, and because it is not specific to any language, it is known as universal. Let’s imagine that you need to match roundness or sharpness with “Bouba” and “Kiki” words. Which one would you choose?  Probably, as others, you would say “Bouba” is rounder than “Kiki”.  A recent study explored this idea with people a part of the Himba tribe, who live in Northern Namibia. Even though the people of the Himba tribe do not use a written language, they also match angular shapes with “Kiki” and rounded shapes with “Bouba”. These results demonstrate that shape-sound association is universal. Why do you think that this is happening? One of the explanations of this phenomenon is the cortical connections that help us to combine perception of the shape, such as the speaker’s lip appearance and movement of the tongue when the speaker says the words. Because of this, it is not surprising that Bouba Kiki effect is universal.

Consequently, arbitrariness of a language has been investigated for a very long time, and most of the results support that sound-meaning association exists in almost every language. This is a universal phenomenon, and it can give us a new perspective about the evolution of language. Also, maybe it is a secret magic trick for learning a new language because it helps us even if we do not realize it. Pay attention to it, and it may make learning a new language easier!

After I completed my bachelor's degree in psychology, I am currently a Msc student in the Social, Cognitive and Affective Neuroscience program at Freie University Berlin. I am interested in language and cognition relationship. View all posts by Selin Biriz