People interested in aesthetics could deepen their knowledge with two exciting articles last week. Nico taught us how the brain decides upon liking the abstract painting Black Square by Kazimir Malevich and Nature published an editorial in which the authors elaborate that happy music and sad sounds are not universal but depend on learning by experience [0]: While it was previously assumed that the difference between consonant and dissonant chords is something universal and innate, a study with participants from the Tsimane’ people showed that this distinction is learned and depends on interpretation. The Tsimane‘ who live in Santa Maria in western Bolivia did not detect differences between consonant and dissonant sounds and found them equally pleasant. The reason for this is a cultural one –their music consists of one melody and do not use harmonies.

This week’s blog post will focus on the neuroaesthetics of music – but please keep in mind that the emotional reaction to musical features (as the above mentioned example of consonance and dissonance) is not universal but depends on the learning experience of the listener. 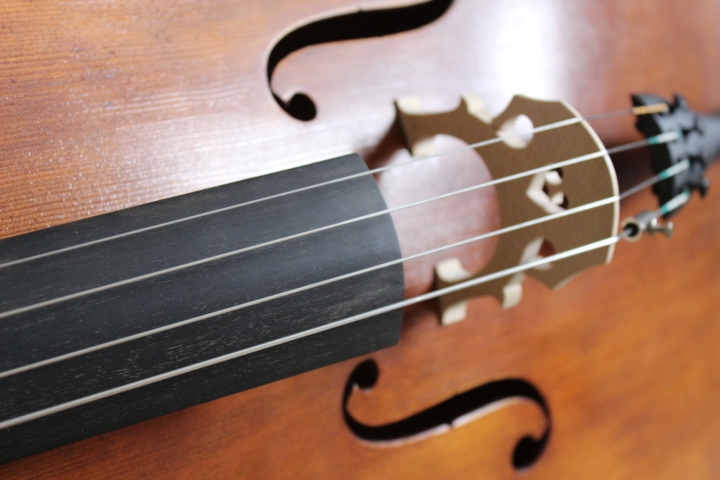 Although research on neuroaesthetics originated from visual perception research and focused, among other things, on aesthetic experiences of paintings, faces, and architecture, it recently expanded to other domains such as music and literature [1]. Elvira Brattico and Marcus Pearce [2], two researchers in this field, summarize the goal of neuroaesthetics of music as understanding neural mechanisms and structures involved in cognitive and affective processes that generate emotions, judgements and preferences – three responses that are all important for an aesthetic experience.

What is an aesthetic experience?

Most of us have experienced aesthetic reactions to music – 84% of Germans enjoy listening to music in their free time [3] comparable to 75 % of Americans who actively choose to listen to music [4] – by watching a movie with background music, going to a concert, listening to music in the car, the subway or attentively at home or being Happy for 24 hours. Probably everyone knows the feeling when a song makes you react so emotional that you literally have goosebumps, that you make a judgment and think “This music is so beautiful.” and that you exclaim “I love that song!” to express your preference (adapted after [5]). Furthermore, music has a mood regulating effect [6] – for example music can reduce anxiety levels in Alzheimer’s disease patients (and some of them even have a preserved memory for familiar tunes) [7] and might have a beneficial effect on pain [8].

Different properties of music are thought to lead to an aesthetic experience, some arise from the music itself, some from associations with previous experiences. Acoustic features like consonance and dissonance, loudness, timbre, beat and tonality can increase or decrease tension [7] and evoke emotions in the listener. In addition, the imitation of physical objects and events (for example thunderstorm or birdsong in The Four Seasons) or the imitation of emotions via their behavioral effects (characteristics of music that refer to gestures, facial expressions) by the music itself are also thought to generate emotions [2]. Furthermore, expectations about music also evoke emotions – and at this point we will finally dig into the neuroscientific research on aesthetic responses to music.

How are expectations about music generated and how do they evoke emotions?

Valorie Salimpoor and her colleagues [9] looked at the ways music can be rewarding for the listener: The experience of pleasure from music is dependent on the generation of expectations, the anticipation of the development or outcome of the musical structure, and the confirmation or violation of this prediction. Since music is a “sequence of sounds organized through time”, expectations could be generated firstly because the music is familiar and secondly because of implicit knowledge from former experiences about music in general (e.g. how harmonics work). If the music is “better than expected” a positive prediction error is produced and dopamine (Table) is released into two regions of the striatum (Table) (the caudate and the nucleus accumbens). This dopamine release reflects also the desire and anticipation of hearing preferred music if the music is highly familiar. It is assumed that a strong dopamine release caused by the music can trigger stimulation of hedonic hotspots in the brain via endorphins (Table) and thus elicit a feeling of pleasure in the listener.

How are emotional reactions to music reflected by physiological measures and brain activity?

One recent study shows how strongly music can influence our physiological reactions. They investigated the influence of the style of music on physiological measures by comparing reactions to tonal and atonal music [10]. Musical experts chose instrumental classical tonal and atonal contemporary pieces that were played via headphones to 50 participants with no musical training. Meanwhile heart rate and blood pressure were measured and participants saw 300 faces that they later had to remember to ensure attention during the whole data acquisition period. The researchers then calculated the influence of music style (atonal vs. tonal) and of emotion (agitating vs. joyful vs. touching) on heart rate and blood pressure.  Heart rate was lower when participants were listening to atonal music in comparison to tonal music. In addition, they had a higher systolic and diastolic blood pressure in response to atonal music. Emotionality of the pieces showed no influence neither on heart rate nor on blood pressure. These changes reflect an increase in alertness and attention and are associated with anxiety and tension. The results showed that atonal music increases arousal and alertness to a greater extent than tonal music due to its complexity and threatening properties– a phenomenon that has for a long time been used to create a fearful atmosphere in horror movies. Who does not shiver while listening to one of the most famous musical themes in movie history, Bernard Herrmann’s The Murder accompanying the shower scene of Hitchcock’s Psycho?

Coming back to brain activity: Stefan Koelsch performed a meta-analysis on music and emotion [7] that summarized results from different single studies to allow for more general statements in this field of research. It included studies with diverse methods: studies on pleasure; on emotional responses to consonant and dissonant music, happy vs. sad music, joy vs. fear-evoking music; on musical expectancy violations and on music-evoked tension. Koelsch showed that listening to music leads to activation in core brain structures important for emotion: The amygdala (Table) processes stimuli that convey social and affective information relevant for approach or withdrawal behavior. Joy-inducing music elicits for example a higher activity in that region. Secondly, the striatum (Table) is activated while listening to pleasant music reflecting its sensitivity to rewards. Finally, hippocampal (Table) activity is associated with music-evoked tenderness, peacefulness, joy and sadness as well as music-evoked positive emotions associated with stress reduction and is related to social functions of music e.g. the formation and maintenance of social attachments.

Frontiers in the study of neuroaesthetics of music

Now that some foundations of neuroaesthetics of music are established, let us look at some new directions in this field. Recent research began to investigate modulatory effects of the listener, the listening situation and the properties of the music itself [2 + 11]. Brattico and Pearce [2] underline that familiarity is known to effect neural responses to music and that attention is a necessary condition to aesthetic experience as it enables the listener to appreciate emotions and memories, make a judgement and decide on preferences. In the following, we will look at one recent study on aesthetic emotions that investigates the neural correlates of the surprising fact that listening to sad music can make us happy and can give us pleasure and does not necessarily make us sad.  Of interest is also the role of musical expertise. It is fascinating to compare people who only listen to music or are lay musicians with those who practice for hours every day and are very skilled in playing their instrument.

While the introduced meta-analysis did not distinguish between different kinds of emotions, Brattico and her colleagues [12] discriminated between two independent sets of emotions, namely basic emotions (such as sadness and happiness) and aesthetic emotions (such as pleasure, beauty and enjoyment). According to them, the independence between these two sets is best illustrated by the so called “tragedy paradox” that sad music can induce enjoyment thus a positive aesthetic experience.

In their study, they not only tried to disentangle the neural structures for the different sets of emotions but also investigated differences between the reactions of laypersons and musical experts. 13 musicians and 16 non-musicians brought their most-liked and most-disliked music with happy and sad character to the lab where researchers selected 18 seconds of each piece. When presented with the self-chosen music undergoing functional magnetic resonance imaging, their favored music activated in both groups the limbic and paralimbic system (Table) and the reward circuit, both considered as crucial emotional and motivational structures. On the contrary listening to happy music activated the auditory cortex thus a sensory area and this activity is seen as reflecting the acoustic characteristics (e.g. major tonality) of happy versus sad music.

These different activation patterns show that different brain structures are associated with perceiving music as happy or sad and with musical enjoyment (liking or disliking), thus the assumed independence is also shown on the neural basis. In general, musicians showed increased activity in somatomotor areas that are associated with body movements and the practice of an instrument and showed stronger responses of limbic regions to their preferred music compared to non-musicians.

Another recent study on musical expertise and emotions [13] focused on the three nodes responsible for music-evoked emotions: the amygdala, the hippocampus and the nucleus accumbens. The connectivity to other regions e.g. cerebellum (Table), a region important for motor control and visual and somatomotor regions was found to be more enhanced in musicians than in non-musicians, a result that fits well with the study mentioned above. Expertise changes functional connectivity and during listening, their knowledge and also their motor skills from practicing an instrument increased the connectivity between regions processing musical emotions and pleasure with motor areas. Interestingly the researchers used complete pieces of music and not excerpts as it is usually done in studies on music and emotion. The use of complete pieces of music more closely resembles the way we listen to music in our daily lives, and it provides a great way to investigate our reactions to music.

To conclude, research on the neuroaesthetics of music is still a new field that needs to be expanded during the next years, also by considering modulatory factors of the aesthetic experience that have partly been addressed in this text. As Donald Hodges stated in his book on neuroaesthetics of music [14]: “As we move closer to understanding how the brain processes musical emotions, musical beauty, aesthetic judgments, and the like, we are also moving closer to the core of human musical experiences.”. Interdisciplinary research is necessary to obtain a deeper understanding of how we experience music – the relevance to also investigate the neural correlates of music and emotion becomes apparent when considering possible applications. In the clinical context, different patient groups could benefit from the therapeutic use of music – for example in the treatment of Alzheimer’s disease, affective disorders and also chronic immune diseases [15]. Last but not least, music plays a very important role almost everyone’s life – and isn’t it fascinating to learn how our nervous system is equipped to let us experience strong emotions towards one of our most preferred free time activities?

[8] Lee, J. H. (2015). The effects of music on pain: A review of systematic reviews and meta-analysis (Doctoral dissertation, TEMPLE UNIVERSITY).